How long do LED strip lights last? Whether its for accent lighting for your gaming PC or for full room lighting, LEDs are a versatile and economical lighting solution. With so many options out there, it can be a bit overwhelming to make a choice on which type of lighting solution is the best one to buy.

A Little Background On Lighting Technology

Lighting technology has come a long way since Thomas Edison found a viable incandescent filament. In the many decades since, we humans have developed lighting technologies of ever-increasing efficiency and versatility.

Incandescent light was produced by sending a little too much power through the right filament in an oxygen free environment. This worked pretty well for a while, but was not very efficient.

Later, fluorescent lights were developed that worked by sending a high voltage through a gas to produce light. This was much more efficient but introduced more components and other reliability and longevity problems.

As you can see from the table above, LEDs last a lot longer than any other lighting technology. 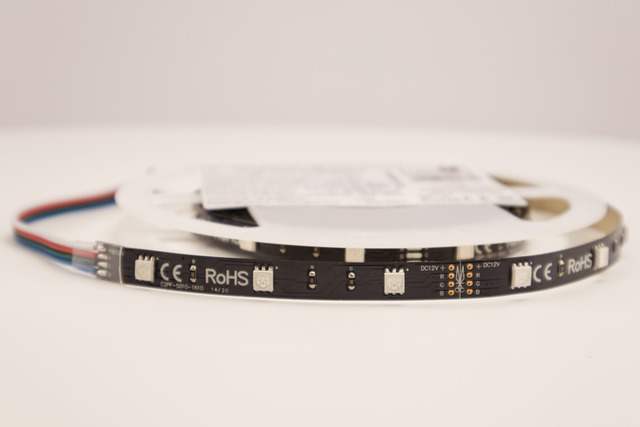 LEDs had already been a thing for a while at this point, but only recently has LED technology matured to the point where they can be used for lighting. LEDs are semiconductor devices that work by generating a band gap between two opposing types of silicon.

As electrons move from a high energy state to a low energy state across this bandgap, energy is lost in the form of photons with the same wavelength as the size of the bandgap. This results in an extremely efficient conversion from electricity to light.

While it is commonly understood that LED strips last a lot longer than cold cathode and fluorescent lighting solutions while running a lot cooler, there are some LED strips that burn out quickly.

For example, take a look at this roll of Govee RGB LED LED Strip Lights Light with Remote Control. These are great for holidays, celebrations, and other short term events. If you plan on running your LED strip lights long-term, however, this Govee set will certainly disappoint you.

This makes LEDs look far less reliable than they actually are. Cheap LED strips are known to be unreliable because the manufacturers that make them do not use high quality power supply components.

Also, if you closely inspect the rock-bottom-priced LED strips, you will find that the wires that they use are much thinner and quality of solder work is much lower quality when compared to a slightly higher-priced LED strip.

When it comes to accent lighting for a gaming PC, LED strip lights offer much more performance and are much higher reliability than older cold-cathode computer lighting solutions. There are several key benefits that using LEDs has over other lighting technologies:

LEDs are much more energy-efficient than older forms of PC lighting. In fact, an LED strip requires about 75% less power than a cold cathode light. This means that adding flare to your PC won’t have a noticeable impact on your power bill.

LED strips last a lot longer than their cold cathode counterparts. The average life expectancy of an LED is more than 50,000 hours, so as long as you properly power your LED strips, they will last longer than the computer.

It’s important to make sure you power your LED strips with a constant current power supply. Cheaper LED strips use constant voltage power supplies, which don’t provide a consistent amount of current to the LED strip.

This leads to failure over time, and it will also cause the LEDs to change in brightness as they heat up. So, if you want to get the most out of your LEDs, its best to power them with a constant current power supply.

LED strips are convenient to install. Unlike cold cathode PC lighting, LED strips don’t require a high voltage to run. This means there are less components required for LED strips to work when compared to cold cathode pc lighting solutions.

With LED strip lights, you can make some truly stunning lighting projects. For example, with an Arduino Uno, a roll of addressable RGB LEDs, and a 5 Volt 5 Amp power supply, you can make anything from a light that features color and brightness settings all the way up to a complicated light show that is synchronized to music.

If you are interested in going this route, I highly recommend you check out this tutorial on controlling WS2812B LEDs with an Arduino.

How Long Do LED Strip Lights Last In A PC?

While its true that LEDs and LED strips can last for up to 50,000 hours if properly powered and cared for, that is not a realistic expectation for PC lighting. This is because in PC lighting, the space is often cramped and heat management becomes a problem.

Remember, the fans inside your computer do a good job of keeping the parts in your case as cool as possible, it will never be able to make them as cool as they would be if they were not confined in a small space.

When multiple heat generating components are confined into a small space, heat will buildup in areas. Heatsinks, fans, and more elaborate cooling systems exist as a way to manage this extra heat and keep it to a minimum.

Why Do LED Strip Lights Fail?

There are many different situations that can stop an LED from working, but most of the time, the LED itself is not what is damaged. Most of the time when LED strips aren’t working, its because a connection is loose.

If there are no loose connections and an LED is indeed damaged, its usually because the LED was either provided too much power, not enough cooling, or both.

Yes. LEDs are constant current devices that have a forward voltage drop. This means that the voltage of the power supply needs to be able to limit the amount of current going to the LEDs. While it is true that powering an LED strip with a normal power supply will work, there will be an unpredictable amount of current sent to each LED.

Remember, an LED strip is many LEDs in series. If you are running loads in series, the amount of current each load will get rather unpredictable if you are powering them with a constant voltage supply. This is because the amount of voltage that actually goes to each LED will be slightly different because each LED has a slightly different resistance.

Also, with a constant current power supply, if one in the series shorts out, it wont effect the other LEDs in the strip.

While it’s true that LEDs are solid state devices and last a lot longer than other lighting technologies, all LEDs will eventually wear out.

The good news is that if an LED is operated at its proper current levels, it can last for up to 20,000 to 50,000 hours. In contrast, if an LED does not get proper ventilation or its giving more power than its rated to handle, it will drastically reduce the life of the LED strip.

The general rule of thumb is the more confined an LED strip is and the less air flow it gets, the more its lifespan will be shortened. For example, LEDs that would have normally lasted the full 50,000 hours may only last 25,000 hours if they are constantly operated in a hot environment.

Do Led Strip Lights Use A Lot Of Electricity?

No. LEDs are extremely efficient lighting devices. Adding LED strips as accent lighting for a computer is not going to use that much power at all. In fact, you won’t even notice a difference on your power bill.

Why Are My LED Strip Lights Flickering?

If the connection to your LED strip lights are fine, then you may just have some burned up LEDs. Low quality LED strip light manufacturers use under-rated LEDs that will burn out after a while.

Flickering LEDs Can Be Dangerous

A burned up or partially burned up LED can create unpredictable electrical patterns that can cause flickering. If you suspect you have some bad LEDs, all you have to do is feel them with your hand. If there are LEDs that dim but feel really warm, then chances are an LED is burned out.

A burned out LED is more or less an unpredictable electrical short. Even though its not producing much light, a burned out LED can use a lot of power. This can be unsafe and, in some cases, lead to a fire.

So, if your LED strip is flickering, its probably best to unplug it right away and completely replace it.

So, how long do LED strip lights last? LED strips can last for many years in the right conditions.

If an LED strip is powered with the correct power supply, they can last for up to 50,000 hours. If an LED strip is not properly regulated, it can fail in as soon as 10,000 or even 5,000 hours. Remember, the lifespan of an LED will be prematurely shortened if it does not get good enough cooling.

We hope this article helped you learn more about LED strip lights and how long they last. Thanks for reading!

How Long do GPUs Last? [Find Out If Yours is Failing]

How Long Do Motherboards Last?

How Long Do Disposable Cameras Last?