Fitbit and Garmin. Kings of sports-based smartwatches. Both companies provide powerful tracking features for fitness and wellbeing. Two of their most popular watches are the Ionic (Fitbit) and the Vivoactive 4 (Garmin).

Which of those two is better? Looking at all of the available overall features, The Ionic wins when it comes to social features, price, and design. With a larger screen and more user-friendly interface, you can’t get much better for smartwatches.

If you want to find out why we prefer the Ionic, check out the rest of this article below. We are going to dig into the new features of the Vivoactive 4 and some exciting tech comparisons. 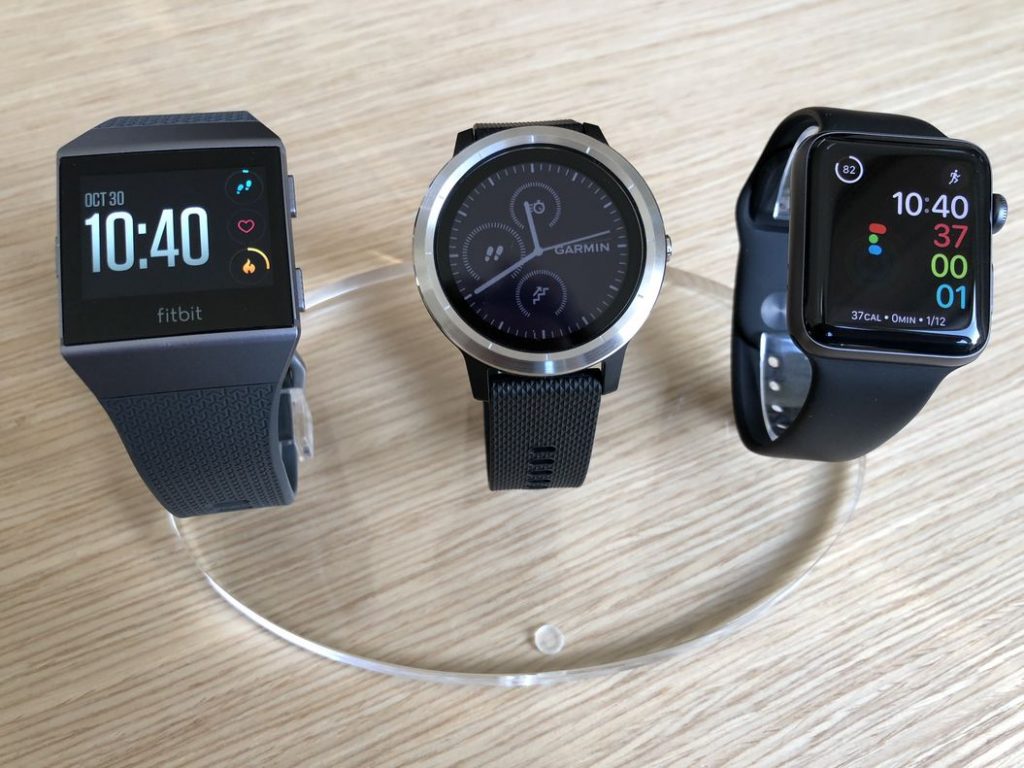 Fitbit Ionic vs Garmin – The Specs

Check out the quick comparisons between the two watches.

Both have a fantastic GPS tracking feature, which builds into the Fitbit application or Garmin Connect. Both of them are associated with Android and Apple products. Both dashboards are excellent in tracking, but Fitbit is better at creating a user-friendly experience given its simplistic focus.

Out of the two, Garmin is the only one that has stress tracking. Thankfully, Fitbit matches this up by providing a memorable meditation application. Fitbit doesn’t have tracking software to tell you about stress, but that holds a secondary place if your goal is to get a workout smartwatch.

Waterproof smartwatches from Fitbit and Garmin are known for producing excellent workout watches. Both the Ionic and the Vivoactive are known to withstand depths up to 50 meters. They can easily survive diving into water and snorkeling.

That means you can wear either of these watches in the shower. However, that might be the perfect time for you to take them off, considering that this is an immobile place that isn’t a workout. Speaking of workouts…

Who Is Better For Workouts – The Fitbit Ionic or the Garmin Vivoactive 4?

Both companies allow you to track on-screen workouts that you can follow. Fitbit has turned this into an engaging social experience, allowing you to join or form various workout groups. While Garmin does have some support for peer-to-peer competitions, it doesn’t feel quite as fleshed out as Fitbit’s offering.

Fitbit’s social features may have a leg up on Garmin, but Garmin has more available that isn’t behind a subscription service.

This availability is essential, as the overall upfront investment of Garmin watches is higher, but the later payments are lower. When asking yourself which is better for your workout, ask yourself if you feel social media motivation. If the answer is yes, you might prefer Fitbit.

Also, both support advanced versions of Bluetooth, so they can connect to wireless headphones.

Fitbit Ionic vs Garmin Vivoactive 4 – Who Has Better Design?

Fitbit has a unique design that sticks out compared to other watches. With a square clock-face and a customizable menu, owning the Ionic provides you a beautiful design experience. Their investment in this is clear, as you can also switch out the band with relative ease.

For those who are allergic to specific bands, this feature is more useful than you realize. Thankfully, Garmin has also recognized the importance of unique colors.  Still, their available bands have less customization than Fitbit.

Garmin also has a more classic watch appearance. The large circle comprising the clock face appeals to people who want something looking like a standard watch. The circular shape and the square touch screen don’t take full advantage of the watch’s face space, but that isn’t too much of an issue.

The Ionic is the clear winner when it comes to customization. But beauty is in the eye of the beholder.

Both watches have access to payment applications. For some people, this is an odd convenience choice, as the screen space is minimal. That means it is more feasible to use your smartphone to enter transaction codes and pins. Still, if you don’t mind squinting, you can leave your wallet behind at home.

Still, the allowance of using your wrist for contactless payment is a sign that we are in the future. Fitbit Pay has much more experience than our Garmin variant. Both are large companies that support a substantial array of banks and cards.

Who Has The Better Battery Life – Fitbit Ionic vs Garmin Vivoactive

Based on our earlier section, you can see that Garmin is the overall winner when comparing battery longevity.  However, the difference between five days of battery life vs eight days is pretty minuscule, depending on your schedule. You may find that the smartwatch of your choice doesn’t need huge battery life.

The battery life on both of them has massive changes if you have music playing. With both devices having a capacity of an average of 400 songs, playing that music drastically cuts your time. Combine that with the GPS mode usage, and your battery could die in a matter of hours.

GPS by itself will already reduce your battery life to about a day. Thankfully, you can turn this function off at will, as you should only use it while running.

Connect IQ is Garmin’s system that includes features for a text response, calendar, weather, and music control. Fitbit also has applications as well, but they have put a bit more time into the user-friendliness of their system. Much of this comes from the significant resolution difference, which makes tapping on the Ionic much easier.

Having too much is never really a problem if your shopping for these devices. The available smartphone notifications are really what make these things useful.

Fitbit Ionic vs Garmin Vivoactive – Which is Better at Sleep Tracking?

One of the most impressive parts of the Ionic comes from its useful sleep tracking software. Garmin has made some significant strides since the Vivoactive 3. If you ever used that version, you may see the app confuse laying down with sleeping. The Vivoactive 4 has less of this issue.

Both have advanced sleep monitoring features, but none of them have a leg up on the competition.

What Makes The Ionic Unique – A Tri-Wave Sensor

The tri-wave sensor tracks the level of oxygen saturation in your blood. SpO2 tracking will allow updates to increase the power of the Fitbit Ionic. This feature will enable Fitbit to assist people who suffer from sleep apnea.

The Vivoactive 3 does not have this feature, but the Vivoactive 4 does have a Pulse OX Sensor. This feature is essential when it comes to tracking how much oxygen your body is absorbing. However, it is less necessary for people who specifically don’t need this.

What Makes the Vivoactive Unique – A Respiration Sensor

The Ionic has a simplistic yoga and breathing tracker. Garmin tracks how you breathe throughout the day with its respiration sensor. This sensor is essential when doing breathwork, sleeping, and performing yoga.

One does wonder if the latest Ionic update will contain some feature like this. One can only wonder for the time being.

A Pros and Cons Roundup: Ionic vs Vivoactive 4

Ionic – What Makes It Better Than Vivoactive?

Vivoactive – What Makes It Better Than Ionic?

The Final Verdict – Which Is Best

After an in-depth comparison of the Fitbit Ionic vs Garmin Vivoactive, our vote for the best overall smartwatch comes back to three factors:

When taking these into mind, the best overall option is the Fitbit Ionic. The Ionic shaves $100 off of your initial investment. The Tri-wave sensor may not be taking advantage of it yet, but it does have the potential to be the better overall sleep tracker.

The oxygen sensor is neat in the Garmin but doesn’t make up for $100. But your opinion may be different depending on whether or not this is an issue.

Whatever your training with, you can expect either company to be an excellent source of data with their available apps. Whatever you purchase, we hope that this guide provides helpful info when picking the best option.

Kanvas Camera vs Native Camera | Which Is Better?

Can You Reuse a SIM Card? [On All 3 Major Carriers]